As a young girl, Arisugawa Nino used to sing with Yuzu, the boy living in the house next to her family’s, which gave her strength and comfort when her parents were fighting. Yuzu moves away one day but Nino is lucky enough to become friends with Yuzu, a boy who composes songs for Nino until he too moves away. Nino is determined to find both Nino and Yuzu again through her singing voice which might lead them back to her. Now, in senior high, Nino is surprised to meet Yuzu who is secretly in the popular newcomer band in NO hurry to shout (Inohari) whose members are wearing bandages and eye-patches to hide their identities. Yuzu asks Nino to join them as their lead singer Alice and this inspires him to write new songs for the band. Nino doesn’t yet know that none other than Momo is now a) a famous pop composer, b) the bassist of a band called SILENT BLACK KITTY (Kuroneko) criticized for being an Inohari copy band plus c) a student in the school Nino and Yuzu attend. When they finally meet again, Momo rejects Nino as he secretly feels ashamed he sold his songs originally written for Nino to other pop singers while Yuzu also has his eyes set on Nino, his Alice – another one-sided love in this triangle that fuels the creative energy of these three young people. 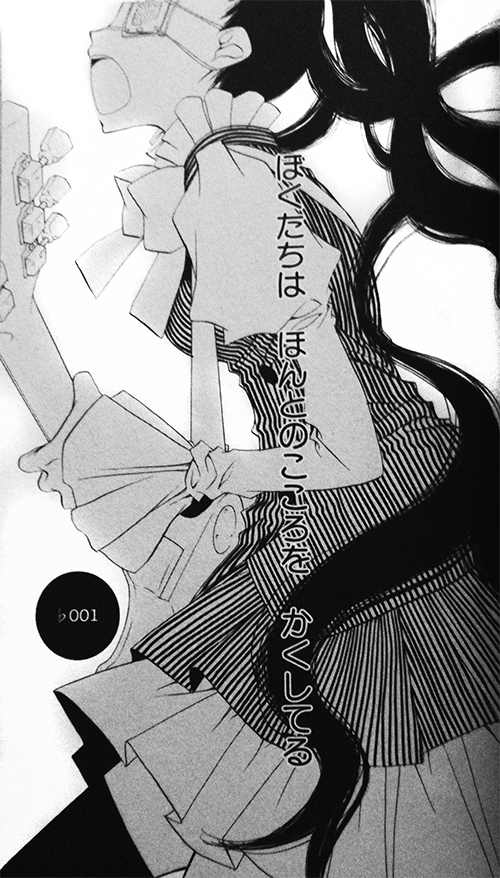 This is the premise of Fukuyama Ryōko’s manga Fukumenkei Noise (Anonymous Noise) which has been running in Hakusensha’s Hana to Yume magazine since 2013, with 12 comic volumes published so far. This is already quite a long series with probably much more material to follow but it doesn’t take more than the first and a little bit of the second volume for the foundation of the plot to be established. One copyline repeatedly used for the series is “Kokoro kakushita kataomoi melody” which roughly translates to “The melody of unrequited love hiding our try feelings” and cleverly refers to Fukumenkei Noise‘s two main elements: romance and music. Inohari’s and Kuroneko’s respective roads to success and their rivalry always run parallel to the main love triangle with all those feelings of attraction and the need for distance it entails plus the side stories also filled with stories of unrequited love. We have Nino who is in love with Momo, Momo who won’t allow himself to return Nino’s feelings, Yuzu who has more than just feelings of inspiration for Nino, Miou who has a crush on Yuzu, Haruyoshi who wants Miou to forget about Yuzu, Kuro who is in love with his older brother’s wife… Yes, we’re in for quite a bit of heartache.

But the backbone of the series is definitely the music aspect. Nino’s journey toward becoming a stronger singer who tries to reach out for her audience and the other main characters’ developments as artists give the series an interesting focus beyond the romance aspect. The dynamics within Inohari make the manga fun and entertaining, as Nino/Alice, Yuzu, Miou, Haruyoshi and Kuro have a lively (but also emotional and complicated) chemistry among themselves. Their rise within the music scene is maybe not completely realistic but it doesn’t leave out the hard work, planning and practice it takes to compose, record and perform hit singles and albums. And it’s that last aspect, the live performances so powerfully put into images in the manga that lend Fukumenkei Noise an almost irresistable sense of pressing urgency and youthful energy. Fukuyama Ryōko relies a lot on her own research and photos she’s taking at concerts and festivals for her visual portrayal of Inohari as a live band. And it definitely pays off because as a reader you do feel the adrenaline rush both of the band and the audience – which is so important because as a manga, the series can’t rely on the key ingredient of the story, the music itself! 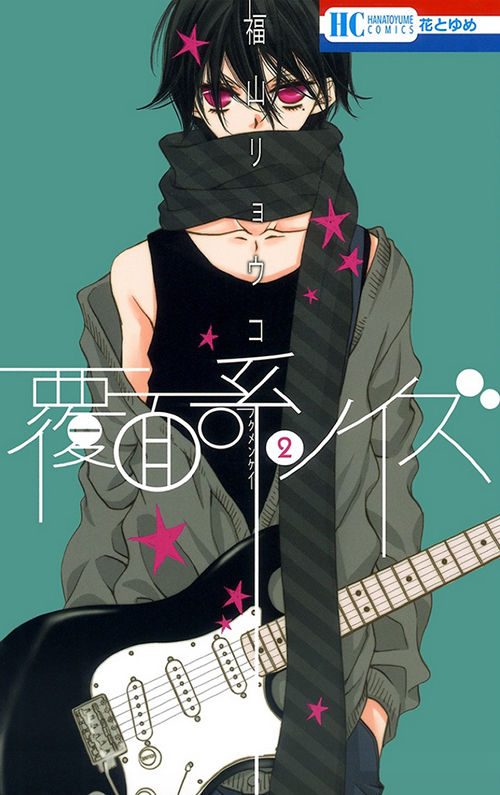 A very minor flaw I’ve noticed is the series is already quite long and there are parts where the plot stalls a little and doesn’t move along as quickly as you’d like. For example, the urgency and speed of the first two volumes are soon replaced by somewhat repetitive scenes of Nino/Alice running amok on stage with her voice, Nino running after Momo has heard her voice while Yuzu’s looking sadly after her, determined to make her voice his. We often get poetic monologues, with sometimes Nino’s and Yuzu’s thoughts running in synchronicity throughout a scene. This can be both a little overwhelming and confusing from time to time, but in the original Japanese version you can at least formally tell their lines apart as Yuzu’s are displayed in hiragana. At the same time, this adds to the sense of chaos and sheer NOISE in the manga which helps build up a very unique atmosphere. And ultimately, the slower chapters serve to build up tension until a change finally happens, for example when Nino overcomes her slump after the band’s first festival appearance and realizes she needs to become a better vocalist by training hard and trying to reach out to the audience in front of her.

Nino is a strong-willed, passionate heroine. She often cuts herself off from the world around her, blocking herself from articulating her thoughts through her voice – the mask she often wears being a symbol of that – and it’s captivating to follow her overcome that isolation. Nino’s main evolution as a character is her road from a rampaging berzerk on stage who races through songs because she can’t control her voice to a somewhat accomplished rock singer. Her obsession with singing and her passion for making herself heard make her a heroine full of ambition and energy. Her vulnerability, after temporarily losing her two childhood friends or when she realizes her shortcomings as a vocalist on stage, makes her even more believable and human. 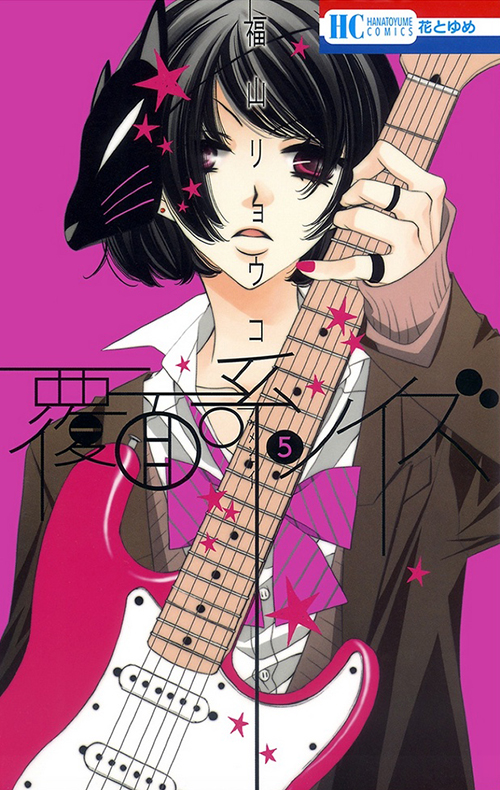 Momo and Yuzu both have complicated relationships with their mothers which is something we only realize bit by bit through hints dropped in short dialogues and backflashes. There are some really cute childhood scenes, especially for Yuzu and Nino. The scenes of their meetings at the beautiful shore of Yuigahama, when they’re kids and then later after they’ve met again, are really powerful. But there are comic elements too, with the constant joke being Yuzu and his omnipresent carton of milk because he’s quite vertically challenged and would love to be taller. We get slapstick elements, some fighting and bickering among the members, some idiosyncratic patterns of behaviour and speech from certain members, like Haruyoshi who refers to himself as atashi, a pronoun reserved for females, and uses a lot of female speech patterns because he grew up with 6 sisters :) And one thing I love is the portrayal of the friendship between the two Inohari girls, Nino and Miou, despite the fact that it’s Nino who gets all that attention from Miou’s crush Yuzu. (I shall forever worship at the shrine dedicated to Miou while everyone else is deciding whether they’re Team Momo or Team Yuzu ;) There’s also a cast of more or less charming minor characters, the Kuroneko band members, other artists and models they work with, the managers and producers, journalists and some fans who serve to shed light on the bands’ stories from their respective perspective, but they always remain somewhat sidelined in the presence of the triangle Nino-Momo-Yuzu. 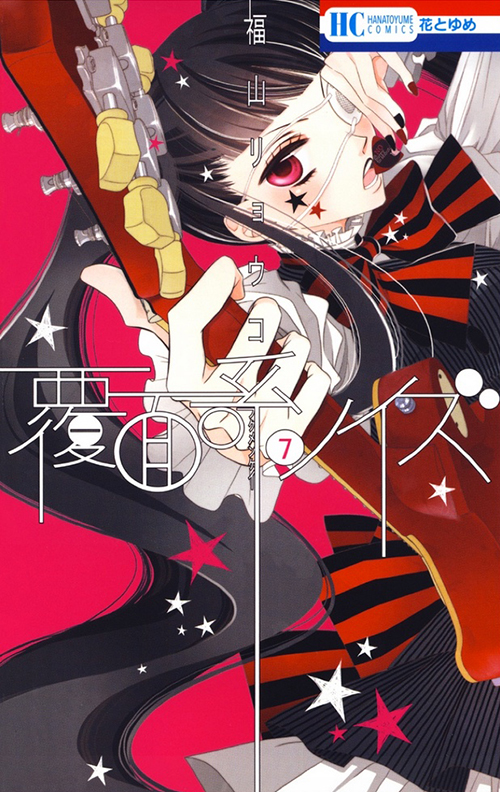 Fukumenkei refers to the fact that both Inohari and Kuroneko use masks, eye-patches and bandages to hide their true identities; this gives them very unique looks, one might say they look slightly visual-kei, with a gothic lolita-inspired Alice. Fukuyama’s forte as a mangaka are definitely her illustrations, especially the ones in color. (In that respect, it’s a real loss for the charms of the series that most of the color illustrations are printed just black and white in the tankōbon versions and can only be fully enjoyed by magazine readers until an artbook is released.) These images match the aesthetics used for ‘real’ albums covers, concert posters, ads and magazine spreads perfectly, giving readers the chance to follow Inohari almost like a band that exists in real life. This experience will now become only stronger with the anime series starting today, April 11 on Japanese TV with a long list of soundtrack singles and albums soon to be available and a live-action movie to follow with a scheduled opening day of November 25. The 13th comic volume has been announced to hit book stores in late June, a limited edition with a drama CD will be available as well. 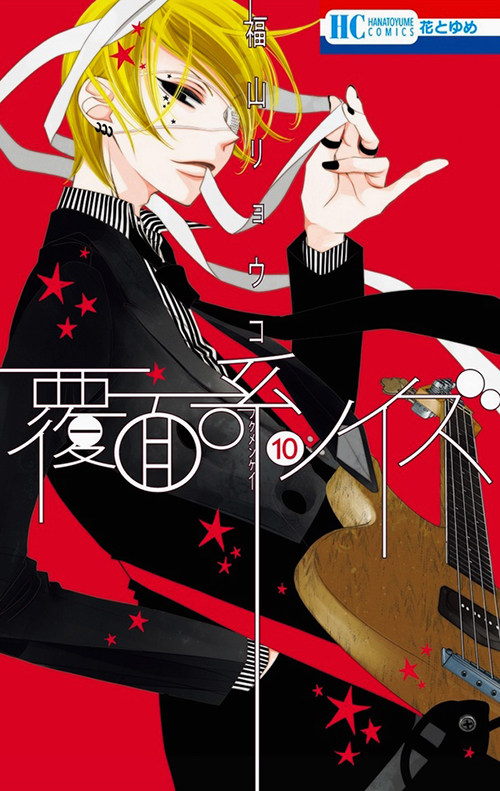 Fukumenkei Noise has the ability to captivate a wide readership, both female and male, despite being a shōjo manga title. It might be similar to another HanaYume series in that respect, i.e. Takaya Natsuki’s Fruits Basket which was also able to reach even more people after it received its anime adaptation and it remains to be seen if Fukumenkei Noise can manage the same. And you cannot help but feel that Fukumenkei Noise also pays homage to the cult classic, the iconic, the one and only music and romance manga for girls by Yazawa Ai – the unfinished NANA! With the genre and a heroine called Nino which isn’t all that far from Nana, the shared name of the two heroines of Yazawa’s hit series, Fukumenkei Noise has been predestined for comparisons with the former. And it is definitely not wrong to call Fukumenkei Noise a NANA for middle schoolers, targeting mainly 13 or 14-year old girls, unlike NANA with its slightly older fan demographic. Fukumenkei Noise is fun, energetic and eye-catching but it sometimes lacks the depth and emotional scope of NANA as it never looks for too long into the abyss of desperation the way Yazawa’s unfinished masterpiece does.

International readers rejoice, the manga is not exclusive to readers fluent in Japanese! It has been licenced for an English publication as Anonymous Noise by Viz Media and the first volume should be in stores around the time I’m posting this. Glénat started its French version (titled Masked Noise) a year ago in April 2016. If you’re interested in more manga by Fukuyama Ryōko, her first series Nōsatsu Junkie has been published in English by Tokyopop, in French by Panini and in German by Carlsen (as Charming Junkie); and her second series Monokuro Shōnen Shōjo is available in French as Monochrome Animals through Glénat and as Monochrome Kids in German via Egmont.