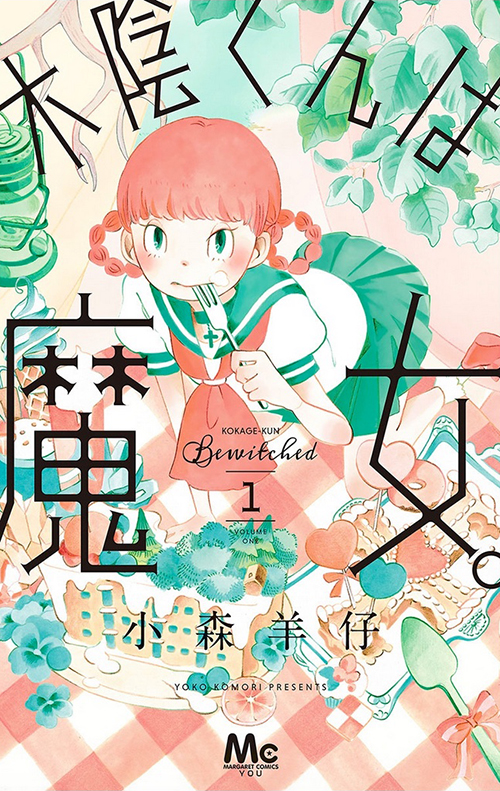 From mid-2015 to late 2016, a strange candy-coloured jewel sparkled brightly in Shueisha’s Gekkan YOU, a monthly josei manga magazine which has a target demographic from youngish female office workers to women in their 50s who all have been reading shoujo manga for a long time, and which usually offers a line-up of mostly romance, comedy and slice of life josei manga by shoujo manga veterans. Yet sometimes it is in the most unexpected places you can find the most unusual, charming little gems, in this case a short series called Kokage-kun wa Majo (subtitled Kokage-kun Bewitched, but more literally translated Kokage-kun is a Witch), published separately in 3 comic volumes. 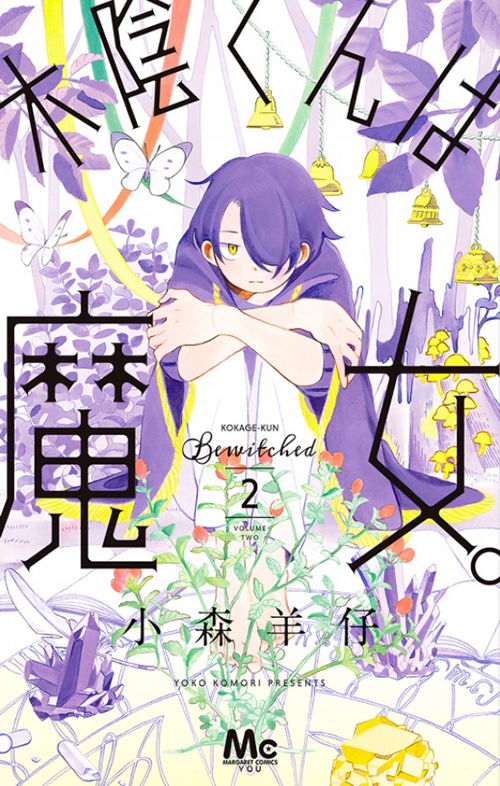 Its young artist, Komori Yōko, is a very recent graduate of Bunsei University of Art and neither a former Betsuma author now graduated to YOU nor a veteran like Hagio Moto, who are all more typical for the latter magazine’s roster. But Komori’s unique art style and inventive story-telling definitely deserve a closer look if you’re interested in exciting new talents. She only has two previous 2-volume series under her belt, one astronomically themed, the other one taking place in a maritime setting, which were also serialized in YOU. In these two works, she has already been able to impress readers with her quiet but entrancing stories and her stunning yet clean art relying heavily on natural motifs. Here, in Kokage-kun wa Majo it’s the plants-growing-out-of-cute-boys-and-girls, slightly pagan aesthetics so popular among professional and amateur artists right now which are combined with pastel secondary colors, playful gothic lolita accessories and fairy tale elements in a suburban and later on more fantastic setting providing a backdrop for a surprisingly dark love story. 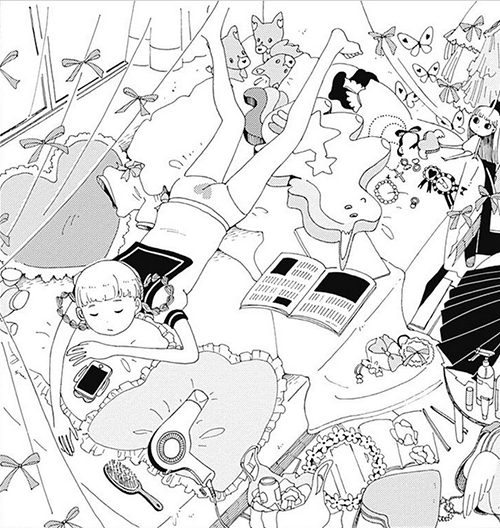 Yumeko, our female protagonist, is a cute but lazy and self-indulgent girl who likes rolling around on the floor of her room in just a pair of panties and her school uniform top. Together with her mother, she lives in a decrepit community apartment building, a fact she’s been trying to hide from the girls in her class – and often from herself as she dreams herself away, imagining herself to be a princess swimming in cute clothes, candy and cakes. (We’re back to an old danchi as the childhood home of a shoujo manga heroine here; see Yamakawa Aiji’s previously reviewed Yajirobee for another example.) But that creepy old apartment building appears to have been hiding one secret from her too, as Yumeko finds out one day: there’s a boy living deep in the mysterious forest located on the roof of the building. The two argue a lot from their first meeting on, but there is something special about him that draws Yumeko back to his green oasis on top of the house. When Yumeko finds herself in a dangerous situation, it turns out that Kokage-kun, while biologically a boy, possesses helpful magical powers linked to nature which he inherited from his mother, making him a male witch! 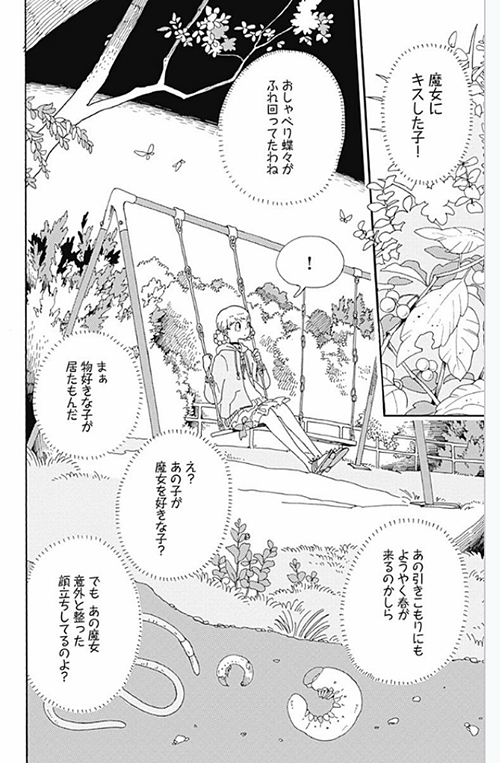 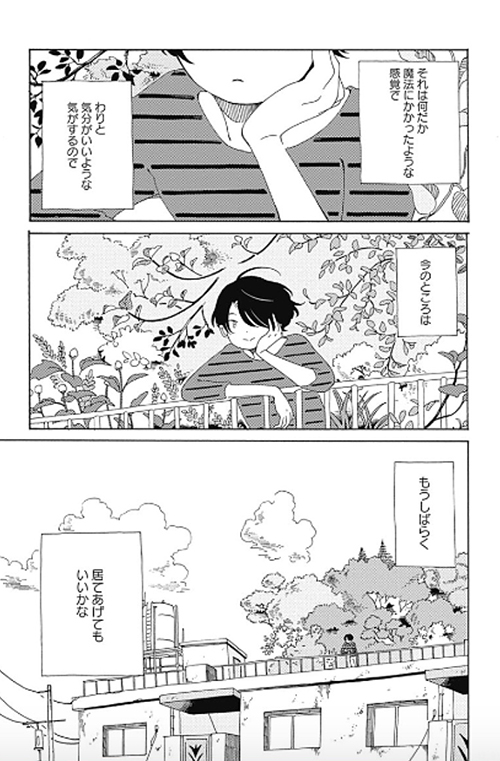 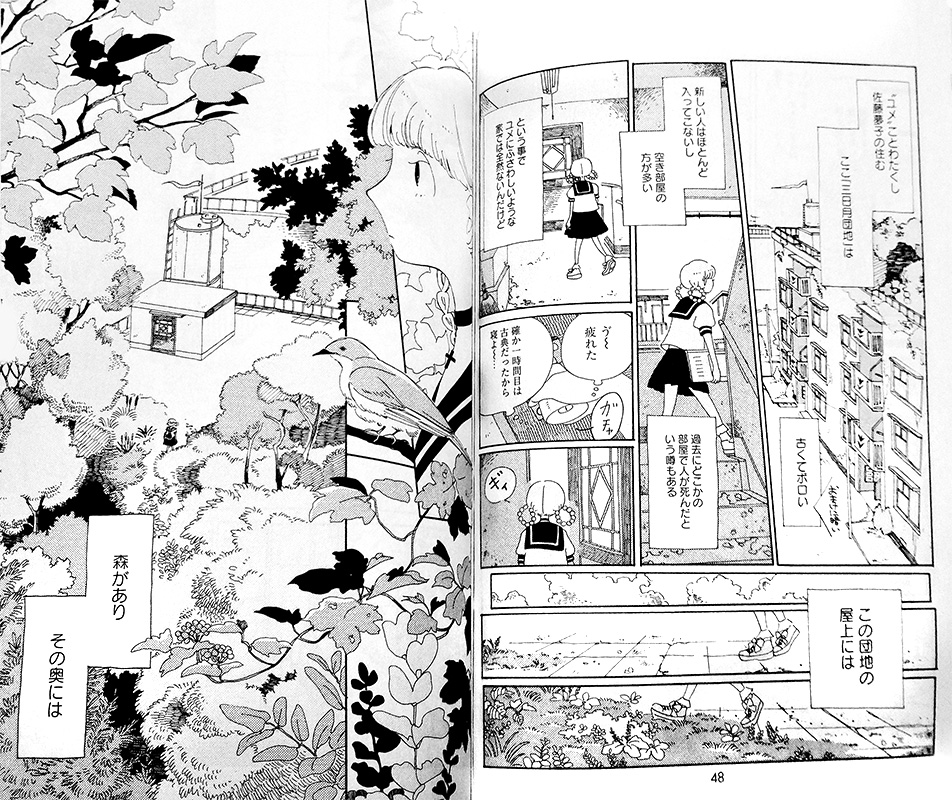 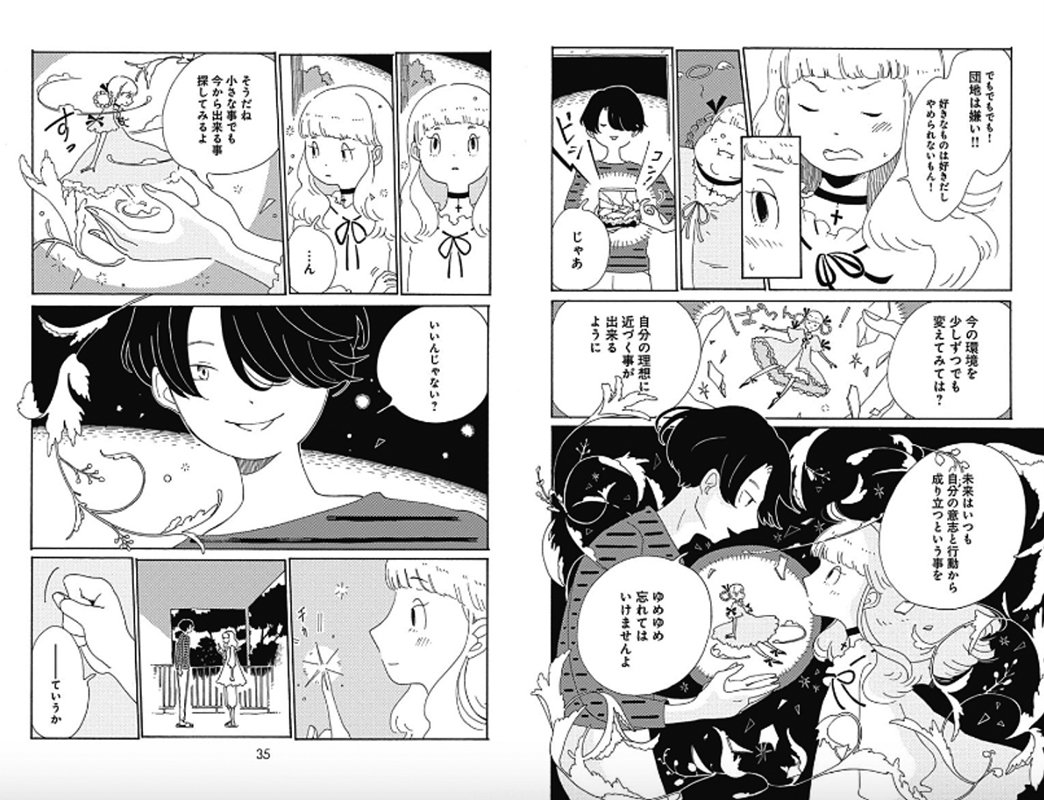 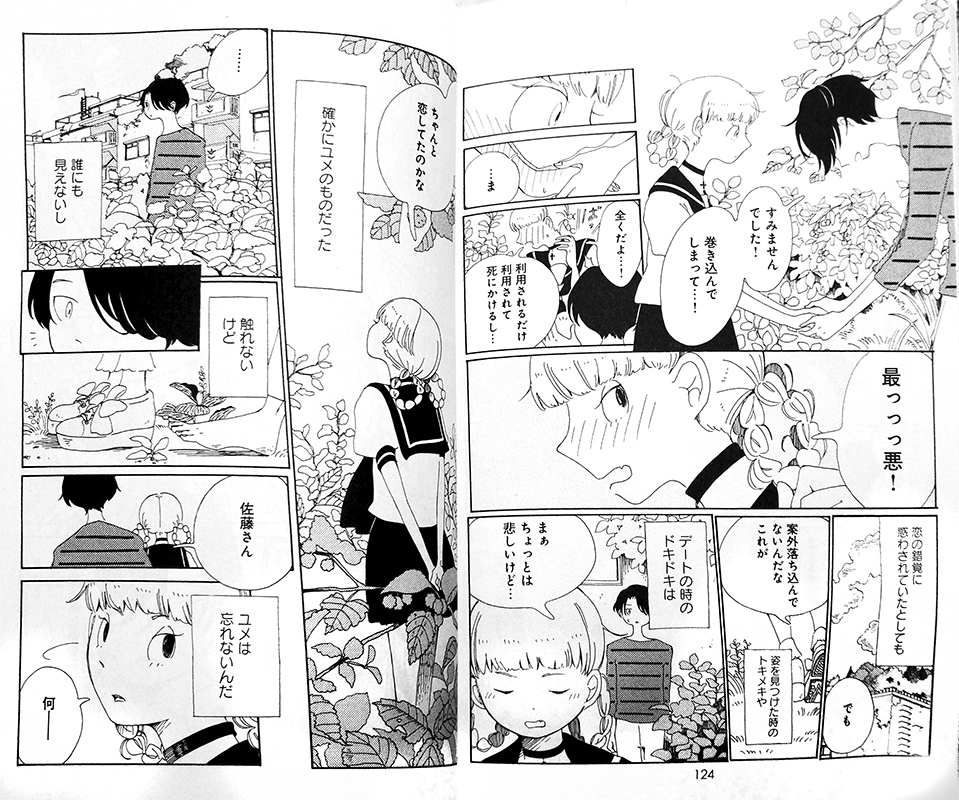 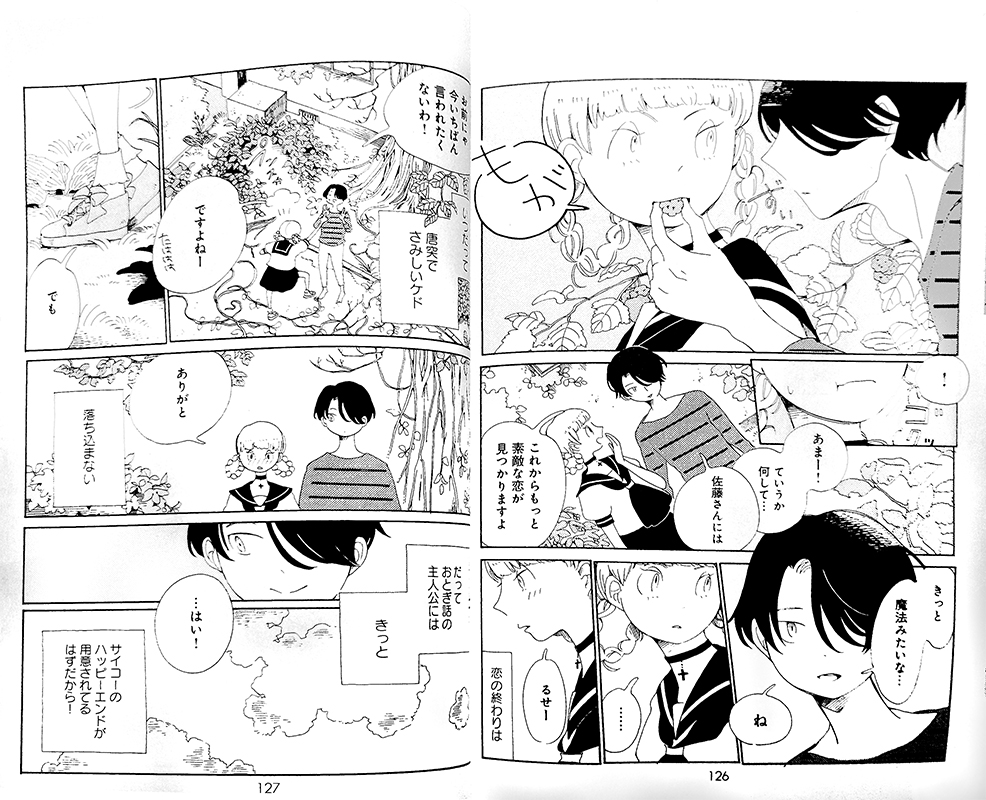 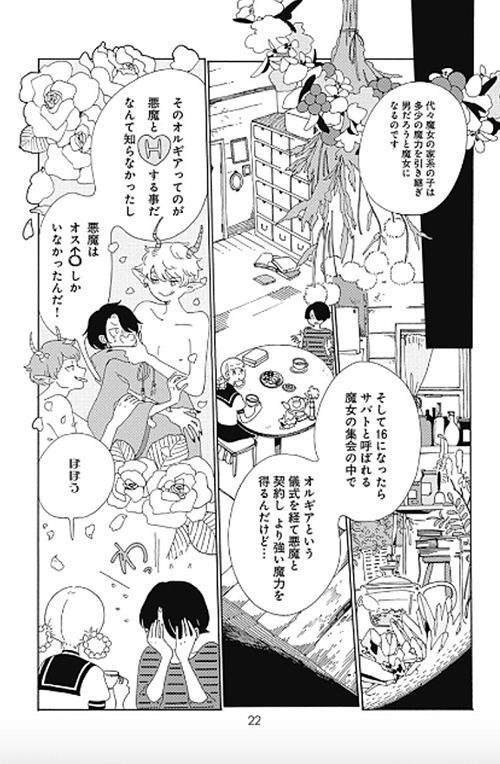 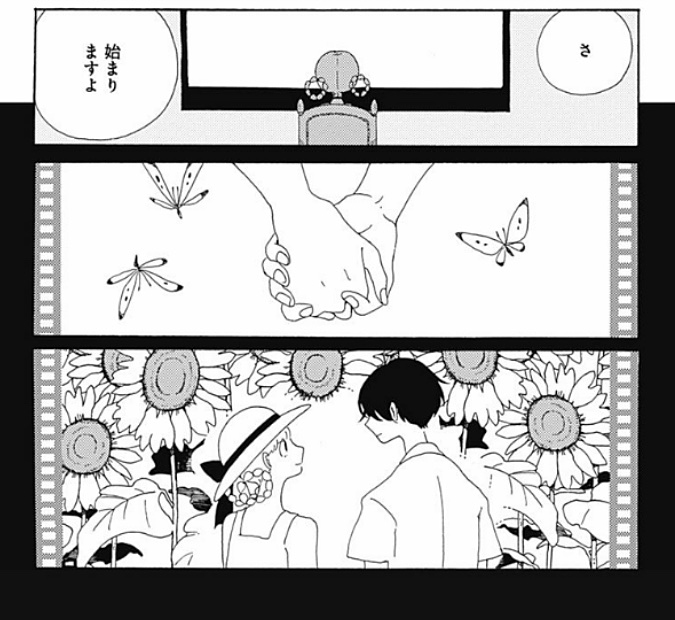 Things get even more complicated when Yumeko realizes that her own feelings for the witch boy are slowly changing when her best friend Nanao falls in love with him. But there is a mysterious strong bond between Yumeko and Kokage: they seem to have a shared past Yumeko doesn’t remember, the proof being a photograph she finds of her and him smiling happily in a field of sunflowers… This is just the beginning of Yumeko’s and Kokage-kun’s dangerous journey to the bottom of darkness which is lightened up by hope, friendship and wonders, more witches, demons and a puppet master, a journey to recover Yumeko’s lost memories of a forgotten love – and to overcome death. 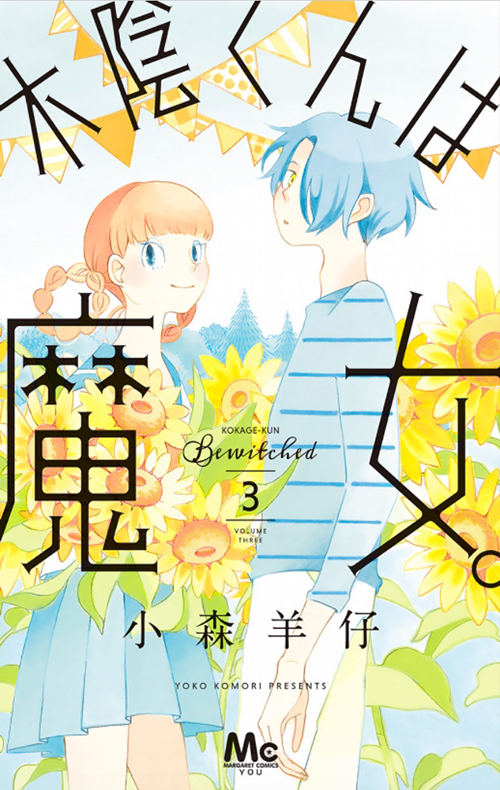 Like mentioned in the beginning, Komori Yōko’s artwork is absolutely delightful! From the beautiful color illustrations for the book covers, sweetly pastel-hued like Yumeko’s beloved candy, to the retro but sparkle-free character designs, which convey emotions expertly through lively facial expressions, to the atmospheric settings – there’s just so much that pleases the eye without ever being overwhelming. The page designs throughout are mostly clean, with the action often put into tidy panels, but also feature pretty details and natural ornaments, like insects, flowers, or even leaves growing out of bodies. But the pages never appear overwrought or overloaded, just as the story is not convoluted but – despite its growing complexity – easy to follow throughout the three volumes. And what is important to stress is that the art of a wildly growing nature is not just a visual gimmick here, as the life force of nature is crucial to the bitter but ultimately sweet story. Komori is also a master of creating memorable scenes just by putting her whimsical characters, fully fleshed out with their own weaknesses and quirky habits, into charming sceneries and settings: the run-down yet retro-cute community housing complex, a haunted forest, a day at the beach that envelopes the reader in its atmosphere so successfully you’ll find yourself able to smell the salty air and hear the cries of the seagulls! 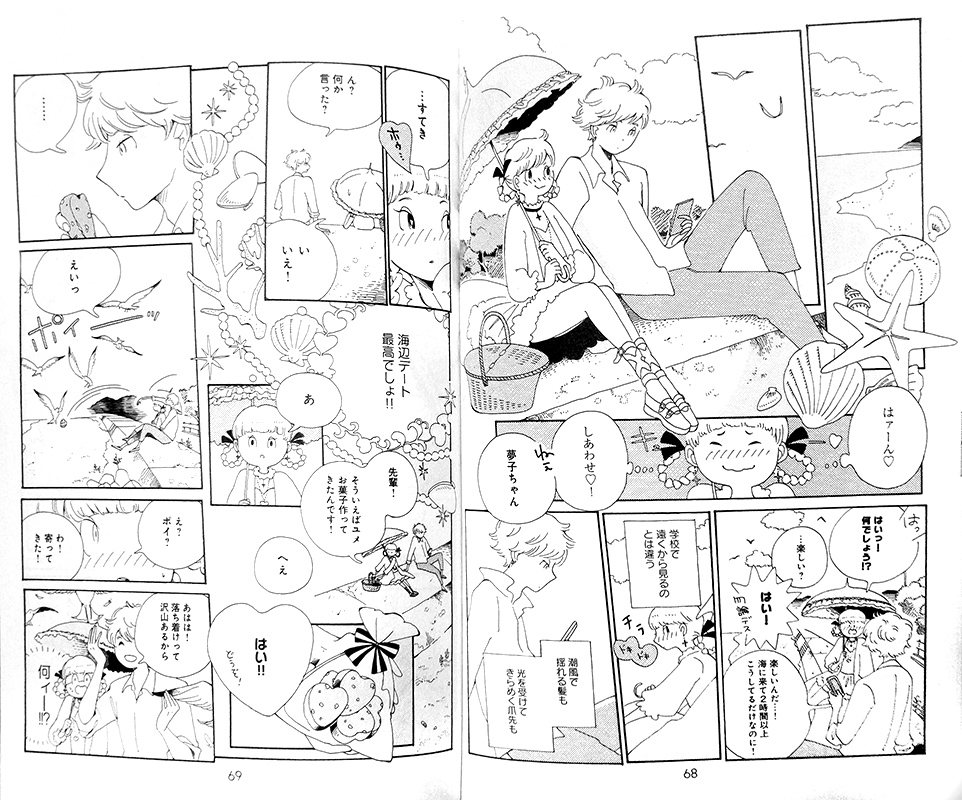 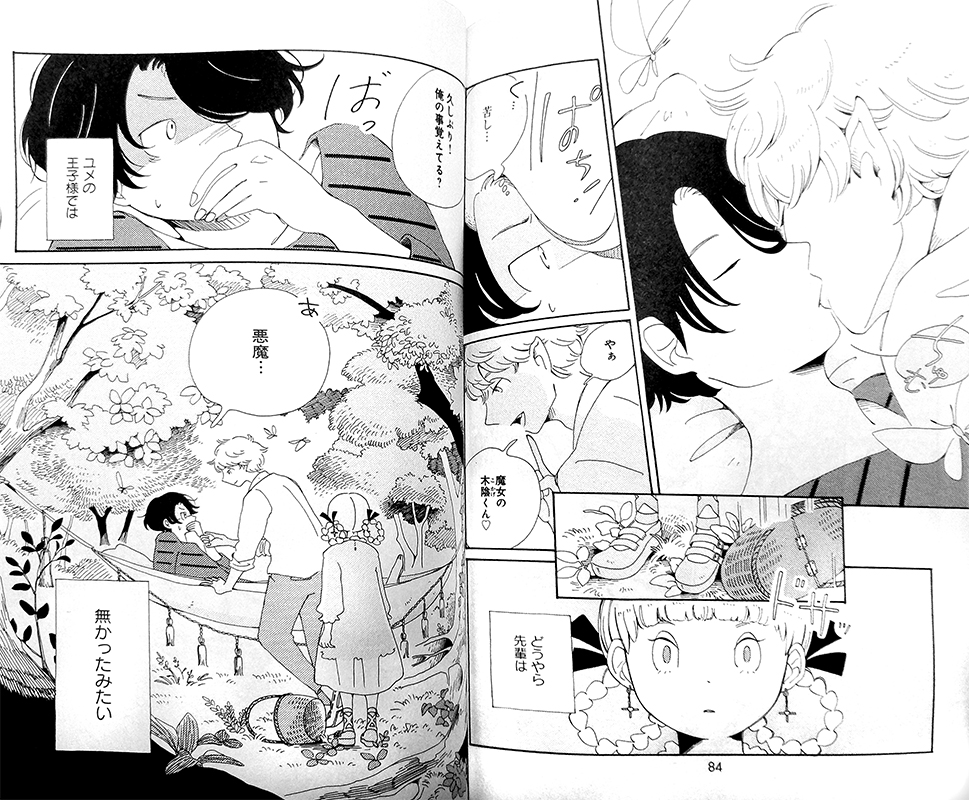 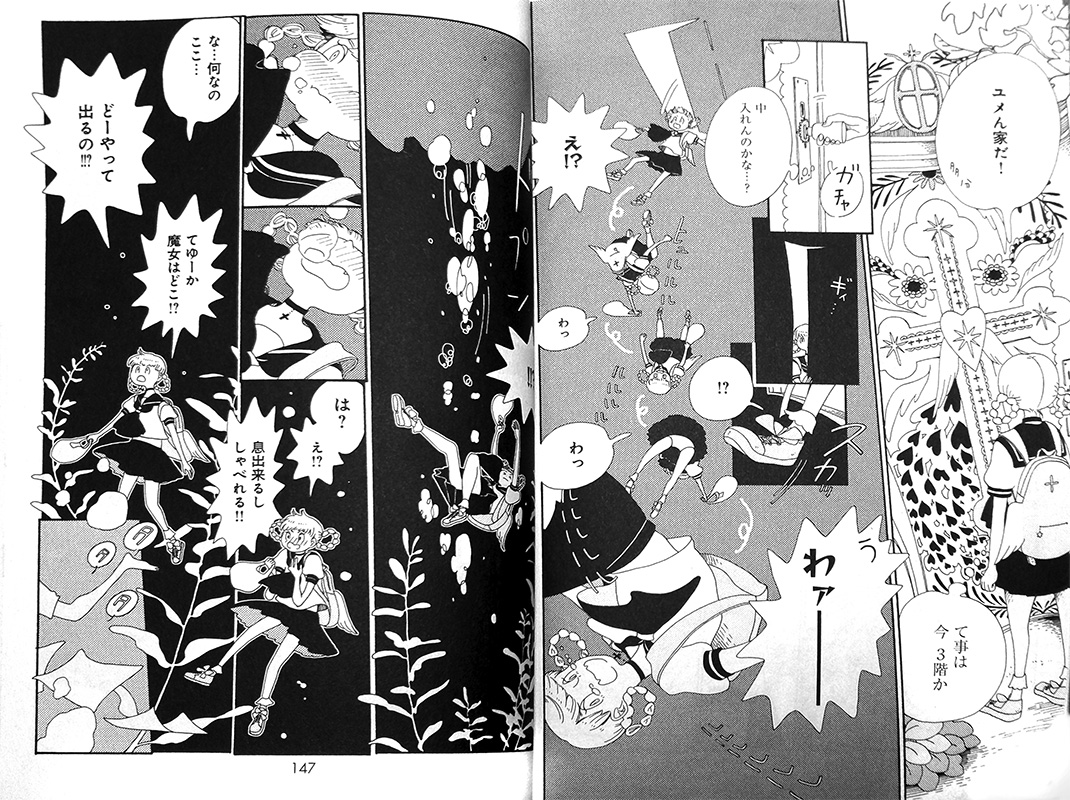 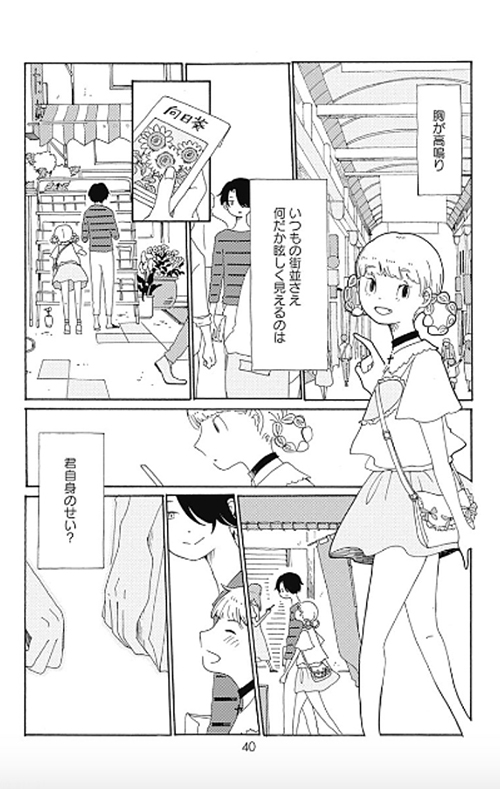 Komori Yōko is not just a wizard of ink and colours: her series is brimming with small inventive ideas which are delivered both through the art and the story itself. Her talent for plotting and story-telling is just as outstanding as her art, as she presents us with a narrative full of twists and turns. Our starting point is witnessing the antics of our lazy heroine, her hilarious lack of self-discipline and her little quarrels with the witch boy, the tone being light and fun with a slight hint of melancholia. As the story unravels it turns surprisingly complex and deeply emotional, combining elements of comedy, fantasy, romance, adventure and even boys’ love. It sometimes even ventures into the surreal which again provides the reader with some unusual art to go along with it. 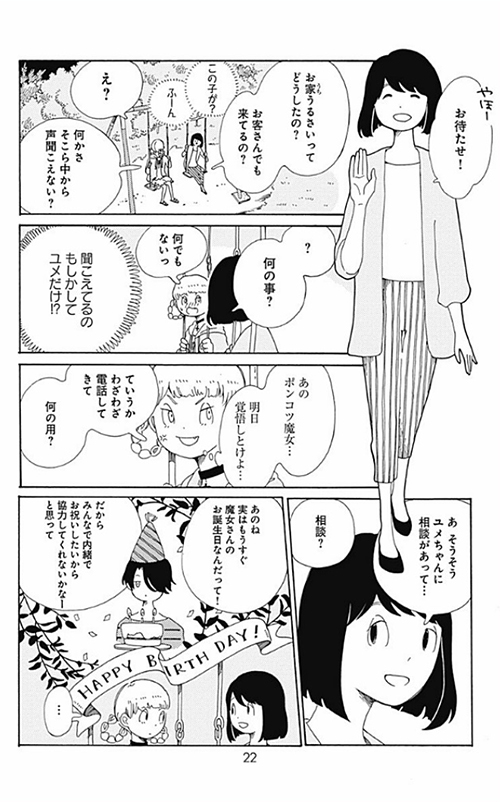 The cast is growing too as Yumeko and Kokage later on are joined by more and more magical companions. And it’s the deepening bonds with Yumeko’s friend from school, Nanao, and another witch girl called Moe that are really nice to watch, as this manga is not just a fantasy romance manga but also depicts friendships among girls in a realistic, multi-layered way. However, the heart of the manga remains Yumeko’s and Kokage-kun’s dangerous journey, as the question of whether the two will be able to save their future together is what will keep readers devouring the pages, desperately hoping for a happy end… 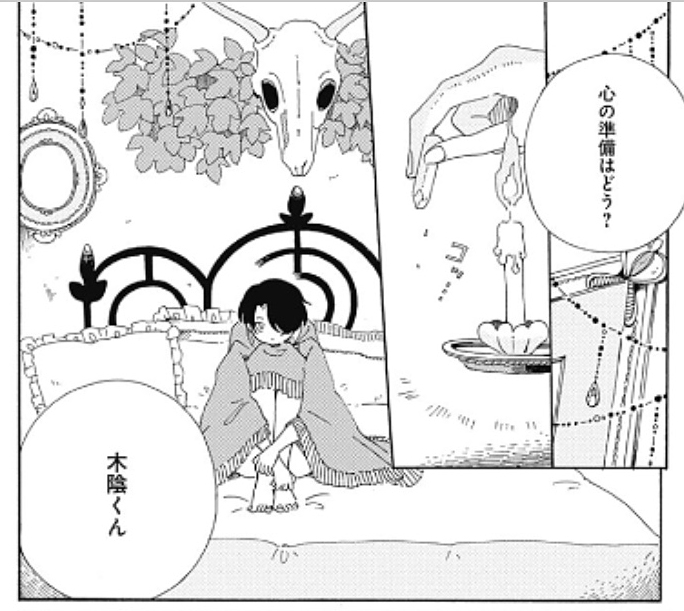 It’s been a while since Kokage-kun wa Majo ended its run and there has been no word on a new work by Komori Yōko, neither short nor long. But now that the artist has finished her art school education, we have to keep our fingers crossed she’ll be able to continue her career as a manga artist and find a lot of support in the future as both her quirky art and story-telling abilities truly stand out in the often rather homogenous sea of mainstream shoujo/josei manga.

← Next post: [Mangaka Update] The Return of Yamakawa Aiji
Previous post: [Manga Review] Who’s got your back? Ushiro no Hikaruko-chan by Ishikawa Emi →
Go to top