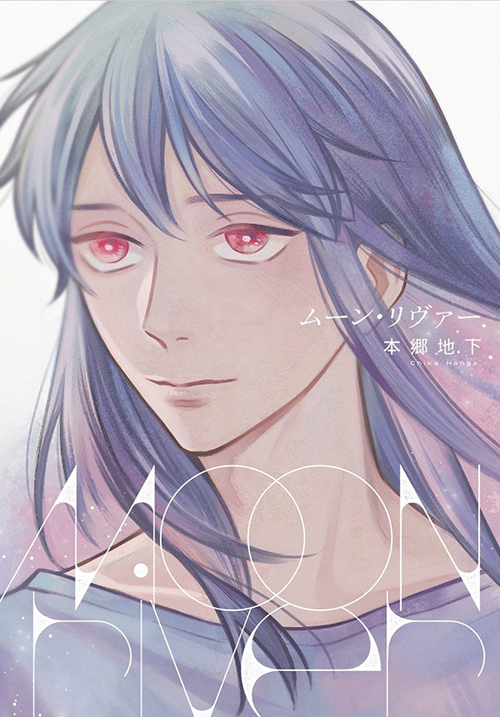 Impulse-buying a book, especially a comic, solely based on its cover isn’t all that unusual. In fact, there’s an expression in the Japanese language that describes just that: jakettogai or, in its short form, jakegai. But buying a book mainly because of its title admittedly might be an even rarer thing. Moon River… You read the title and instantly hear the same-titled song in your head as an air of bittersweet nostalgia brings back memories of the lovely Audrey Hepburn in Breakfast at Tiffany‘s… A closer look at the cover illustration of Hongō Chika’s one-volume manga Moon River might give you a hint that the story told on its pages will be a little different than the one about the materialistic and naïve Holly Golightly in the aforementioned classic Hollywood movie. The eyes of Kurea (クレア, possible romanizations are Clair, Claire or Clare), one of the protagonists of the manga, are glowing ominously red, suggesting he might be something else than a mere mortal. And yes, this is the story of a vampire and his relationship with his human companion of 20 years, the second protagonist Roka. 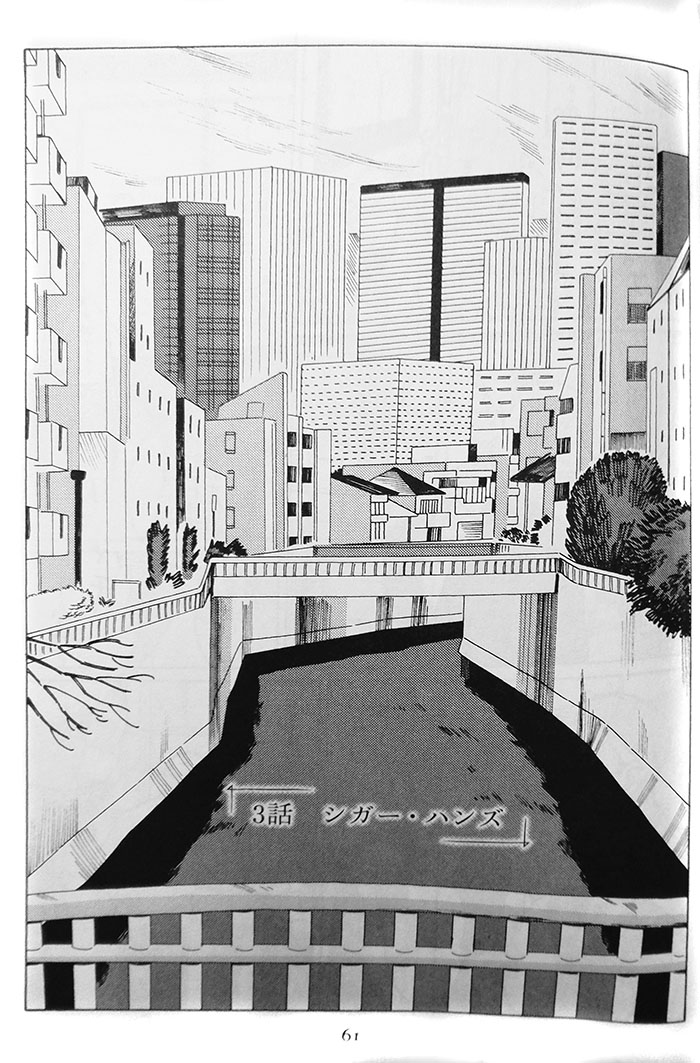 Utsumi Roka is a young man who works as an editor in the picture book department of a publishing house. His endeavours to become a published picture book writer himself haven’t been successful yet but he doesn’t want to let go of that dream. He’s living in a small apartment by himself when one Halloween night, he is more or less forced to take in an old acquaintance: an American called Kurea whom he met back when Roka was a small lonely Japanese boy after his father’s work-related transfer to the USA. It doesn’t take long until we learn that Kurea is a special kind of vampire via a genetic mutation which makes him an outsider among his dominantly “pure-blood”, “turned by being bitten or having had blood contact” kind. He has “lived” a long long time and has to take special types of medicine to help him live a seemingly normal live, unharmed by the sun and contaminated water. But those pills come with side effects and Kurea is still sick once a month.

Quiet scenes of the two men’s everyday lives are presented to us: Roka working hard at the office, the shy man getting closer to one of his co-workers, giving him career advice; his difficulties of living together with Kurea in the apartment as the open river flows gently right behind the house. Roka putting up a telescope, watching the stars. Kurea resting after taking his pills. Roka’s obsession with Japanese sweets and desserts that makes him go to different parts of Tokyo. Kurea’s constant smoking by the window. It’s almost as if they’ve achieved a kind of timelessness for themselves through their routines, a fake sense of eternal repetition.

But then a third person breaks that fragile balance of their humble, almost ordinary lives: Lucian, a man in an elegant old-fashioned suit and hat, with a fixation with quality Japanese household appliances (don’t ask!), like Kurea a heavy smoker and like Kurea a vampire, but of the “pure-blood” kind in his case. Lucian has taken on the role of Kurea’s guardian, checking in on him and his health – and making sure that Kurea is keeping his life with the very human Roka on the downlow because other, more powerful vampires don’t like it much if their kind mixes with mortals. Short flashbacks and nothing but hinted words serve as reminders of the extraordinariness of Kurea’s existence and tell of the tragic past of Kurea’s and Roka’s life in America, their feelings for each other and the measures Roka was willing to take to become a vampire himself, until he tragically failed. What fate awaits them when one of them is destined to live forever, unlike the other one who is faced with his own mortality and the desperation of not being able to stay with his companion until eternity? 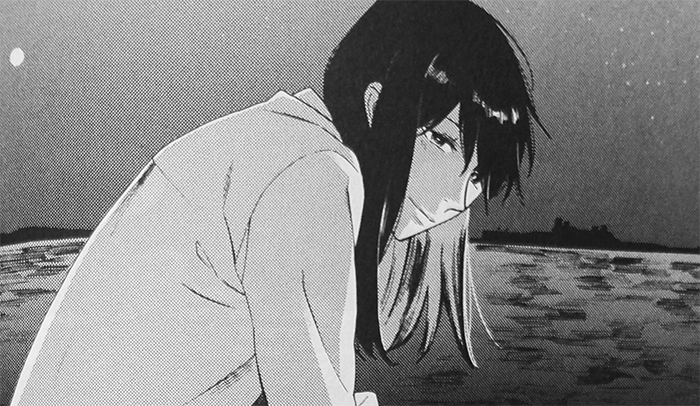 Avoiding so many stereotypes established by previous works of the genre and delivering interesting twists and unusual details, Moon River can be called an almost realistic vampire story that can definitely be enjoyed by people who usually don’t read vampire stories. And it’s a Boys’ Love story, even for people who aren’t that much into BL – but also (and naturally), for BL fans. Hongō Chika can be considered a BL author; her only other comic volume published to date was published under the BExBOY Comics Deluxe label, for example. But since Moon River originally ran in Wings magazine (Shinshokan), the nature of Roka’s and Kurea’s relationship is only hinted at and never gets explicit or graphic. This story relies on few words and explanations in general which means a lot of reading between the lines is required from the reader. Emotional outbursts are almost nonexistent here. It is more concerned with everyday life, one’s daily habits and being present in the moment, with hints of the past and – in the end – of the future. Almost until the end, it preserves its quiet atmosphere that keeps feelings under the blanket of routine and the seemingly ordinary. 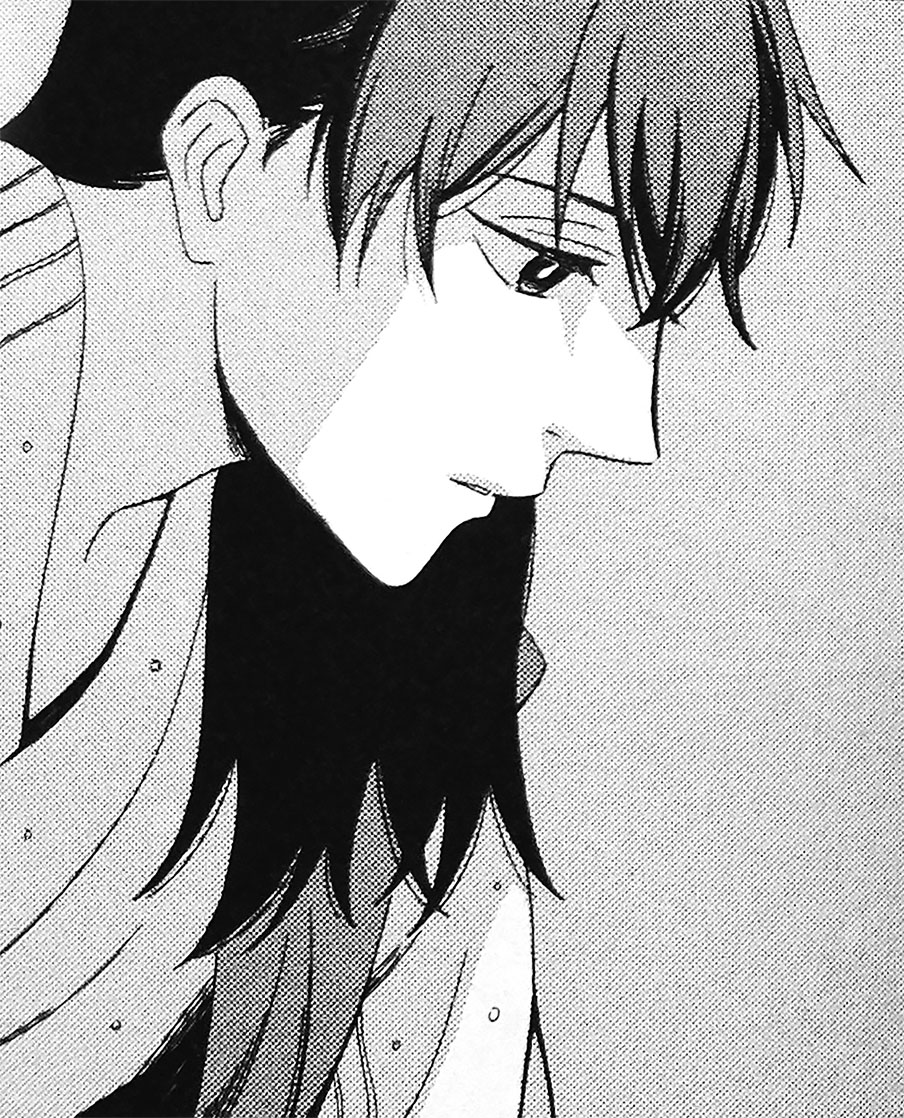 And Moon River is presented with a lot of restraint on more than one level, not just the narrative one. One of its most striking elements is the setting, the location of Roka’s apartment in a house with the river flowing openly behind it. (The author has identified the river as the Kandagawa and the location as Yayoi-chou in Nakano-ku, Tokyo, in one of her tweets.) The depiction of the quiet neighbourhood and the small, sometimes stifling apartment really draw you in as a comfortable place you want to be in with the characters. Angular architecture is paralleled by clean page layouts and panels dominated by rectangular, bold lines. The backgrounds are not too ornately detailed which serves and increases the low-key atmosphere of the entire work. The character designs are somehow reminiscent of the 1990s Wings style, with more emphasis on realism than on classic shōjo manga-style super pretty characters with sparkles in their eyes or roses decorating their hair. We do get a lot of interesting perspectives and a variety of facial expressions despite the simplicity. Emotions are expressed very well graphically in mostly subtle ways that mirror the characters’ inner restraint. 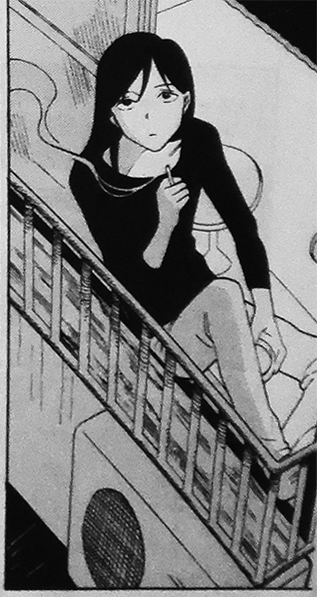 Maybe every shōjo/BL work that’s telling a vampire story with more or less evident homoerotic elements must be prepared for comparisons with Hagio Moto’s classic Poe no Ichizoku. Moon River seems almost like its antithesis with its emphasis on everyday life, a small cast of characters that aren’t too complex (which by no means is meant as a bad thing here), foregoing the lavishly decorated, the grand and the epic. But it does hold at its core a theme central to the whole vampire sub-genre: the lingering within the stream of time, as humans die while vampires endure and have to witness the humans’ passing away. An important idea here is that of a piece of art, more specifically a picture book, but also literature and culture in general that preserve the essence of a human being long after its death. Through Roka’s & Kurea’s story, Hongō Chika tells her readers about the human desire to leave something behind that endures longer than our own life, that is of use to other people longer than our stay on earth. And here it’s being creative, more specifically creating something beautiful through its meaningfulness to others, that emerges as the essence of being human and that allows us to be connected with other minds, transcending time and space. Ultimately, it is a story about death and how to transcend it – the essence of the lyrics of Moon River, the song, and Moon River, the beautiful, simple but touching manga volume by Hongō Chika.


And now have a cookie for reading all the way down here: Hongō Chika herself posted the original illustration used for the final cover artwork through her Twitter account ↓